It’s indisputable that technology is displacing many of today’s jobs. The question is: what should, or can, we do about it? This series—parts 1, 2 and 3—explores the possible consequences of this shift and how information use and decision making support can, and should, drive a better outcome through enhanced and expanded Business Intelligence. In this final Part 4, I examine how that (somewhat) utopian outcome can be achieved. 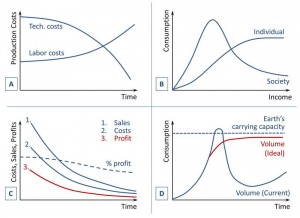 Business Intelligence and analytics allow exploration of business performance and predict future trends. These tools are also used to explore where the overall economy is going. Unfortunately, few economists look beyond traditional measures and fail to explore novel economic approaches to the changes ongoing at present. As a non-economist, and without access to the base data, all I can do here is propose some analyses and, based on common sense, suggest what the results might look like in the accompanying graphs (click on graphs to enlarge). There are, no doubt, other valuable analyses—such as how this would look in the developing world.

[A]: trends in labor and technology costs diverge, suggesting that producers will increasingly switch investment from labor to technology driving unequal distribution of wealth from labor to capital.

[B]: for individuals, increased income leads to higher consumption (up to some maximum), but in today’s society as a whole, with the income of mainstream consumers dropping due to trends [A], overall consumption drops.

[C]: profit, driver of the capitalist economy, decreases towards zero as both costs [A] and consumption [B] drop, even if percentage profit margin remains relatively stable.

[D]: irrespective of economics, consumption cannot increase indefinitely due to the finite limit of the Earth’s carrying capacity. The current model is boom and bust; an ideal model would respect a limit to overall consumption.

The (common sense) data shown in the first two graphs suggest that the current economic model—linking production to middle class work and income and on to mass consumption—is no longer viable as the lines in [A] approach/cross and wealth moves from labor to capital. Unless the curves in [A] are radically wrong, which I don’t believe, the only viable solution is to break the work-income linkage for the middle classes as it has long been effectively broken for the upper classes. This is the essential idea behind the concept of basic income—an income unconditionally granted to all on an individual basis, without means test or work requirement—in this context an equitable distribution of income from capital as income from labor dries up.

Basic income, supported by the likes of Martin Luther King, Jr., thus offers the first and essential component of a utopia: freedom from the drudgery of work necessary to put bread on the table and a roof overhead. In such an environment, a true gig economy—where independent people take on discrete tasks only when they want to for advancement or even pleasure—becomes possible and attractive, rather than one chosen in desperation by the hungry and used by employers to reduce committed costs. The approach is already under consideration in a number of European countries.

Graph [C] exposes another economic reality in a technology-enabled economy: the profit motive becomes financially unattractive. Although we have had profit as one of the tenets of capitalism for a couple of hundred years, it should not be seen as sacrosanct. The modern (re-)emergence of the concept of the Commons, particularly in its expression by Jeremy Rifkin as the Collaborative Commons, offers a very different basis for the economics of a society beyond traditional capitalism. This second element of a utopia is based on universal communication and connectivity (Internet and Internet of Things) as well as democratization of energy production and manufacturing through advances in solar energy, 3D printing, and other technologies.

The final component of this (somewhat) utopia emerges from graph [D]. The consumer society is, exactly as the name implies, driven by the idea of ever growing consumption. While it has much deeper roots, an indication of its motivation is given by Victor Lebow in a Journal of Retailing article “Price Competition in 1955” who says: “Our enormously productive economy demands that we make consumption our way of life… that we seek our spiritual satisfactions, our ego satisfactions, in consumption.” In recent years, growth in population and individual consumption levels pose the question of where the limit is in the Earth’s ability to support an ever-growing level of total consumption. Scientific opinion on climate change, ocean warming, etc. suggests we are near that limit. As a consequence, curbing population and consumption seem reasonable, if not inevitable.

I began with three stances on the impact of exponentially improving technology on employment and the economy: head in the sand, dystopian and (somewhat) utopian. My impression is that sentiment is moving today from the first to the second. That’s a bit depressing! Business intelligence and analytics offers the possibility to explore some more innovative and positive implications. I invite those of you with the tools and skills, as well as access to the relevant economic data to take another look at what’s possible. Despite all our fears, perhaps it’s now the moment to consider a possible (somewhat) utopian future! Good luck with your analysis…