The world of sports loves statistics. In fact, there is a growing movement in several professional leagues to make data analytics techniques a bigger part of the decision-making process. The world of business could learn a lot from professional sports teams and leagues as they move to embrace data-driven decisions. 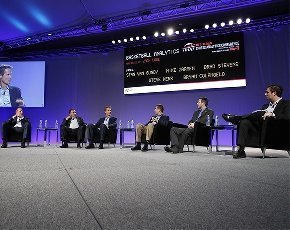 Speaking at the MIT Sports Analytics Conference in Boston, Bryan Colangelo, the former president and general manager of the Toronto Raptors of the NBA, echoed comments frequently made by businesses that are starting to adopt data analytics. In particular, he said getting decision makers to trust and use the recommendations of analytical services can be very difficult.

"The single greatest thing I learned is that, as great as these new tools are, it can be very productive for you, but it can be equally destructive if it's not communicated or messaged in the right way," Colangelo said.

He said the opportunities afforded by analytics will become clearer in the coming years, and teams will move aggressively to hire more data scientists. Eventually, these trends will help bridge the gap between the analysts and decision makers. But for now, organizations need to think carefully about how they are going to incorporate analytical findings into their operations, Colangelo said.

A lot of the analytics stuff can be really useful, but if you're using that in place of … watching film, you're making a big mistake.

Data quality is one of the main reasons why decision makers may not trust data analytics tools. Stan Van Gundy, who most recently coached the NBA's Orlando Magic in 2012, said he never felt confident his staff was recording information correctly. This made it hard for him to trust their recommendations.

For example, he said his staff would record the number of times opposing teams would run certain plays against his team. Staff would also track which players were involved in defending against these plays to determine which players were best in given situations. However, after sitting down with his video staff one day, he noticed that they categorized plays differently than he would.

"I don't trust most [data]," Van Gundy said. "I don't know who the hell is recording that stuff. A lot of the analytics stuff can be really useful, but if you're using that in place of sitting down and watching film, you're making a big mistake."

Dealing with disparate data sources is another challenge. Oscar Fernandez, director of application development and business intelligence for Major League Baseball, said his organization has always known that it is rich in data. It is only now starting to figure out what to do with it all.

The league currently operates a database of player information, which includes full stats for players' entire careers, information on transactions players have been involved in and personal information on players. The league is also starting to incorporate video and news feeds into this database. The goal is to turn it over to teams to help in the scouting process by giving as much context to the stats as possible. But, at the moment, the league hasn't developed the right visualization that can bring all these different data types together seamlessly.

What data analytics tools are companies most interested in?

So how are teams and leagues solving these data challenges? Steve Phelps, executive vice president and chief marketing officer at NASCAR, said getting executive leadership on board with the transition to data-driven decision making is important. He also recommended starting with an easy win. When an organization is able to quickly get in place an analytics system that delivers relevant and reliable information, the whole team is more likely to adopt it. Starting with a smaller project that can be accomplished easily is one way to do this.

Chris Granger, president of Sacramento Basketball Holdings, which owns the NBA's Kings, said it's important to know the problem you are trying to solve with analytics techniques and then organize or acquire data that is relevant to that problem. For example, he said analytics was first applied at his organization to the problem of ticket marketing. He said the team had a good set of quality data, which made the solution clearly defined and kept the scope of it manageable.

"You have to figure out what you're trying to solve," Granger said.