Like the displacement of compact discs for digital audio players just over a decade ago, a true paradigm shift is taking place right now that means more momentum for mobile business intelligence (BI) adoption, according to Howard Dresner, president and founder of Dresner Advisory Services LLC and a former Gartner analyst.

“Mobile BI is not new; it’s been around for a decade or more,” he said. “But there were never any feasible products out there. Platforms, infrastructure and even the culture didn’t appreciate mobile BI. ”

Get to know the lesser-known benefits of mobile business intelligence

That’s all changing, Dresner found, and he offered more than anecdotal evidence to back up his assertion. He’s recently completed a survey The Updated Mobile Business Intelligence Market Study, giving him new data to compare to a similar effort in mid-2010, when he surveyed 200 executives about mobile BI in industries as diverse as technology to publishing.

“When I published the results in late summer, I was early,” he said. “Most people did not have an appreciation of what was happening in the marketplace.”

Dresner himself is a part of the very shift he’s researching. When tablets, such as Apple’s iPad, entered the market just last year, Dresner was a naysayer. But after getting his hands on an iPad (not his preferred brand, he quickly points out), he changed his opinion.

“When you saw how you could interact and consume information, and the human factors associated with it, a light bulb went on,” he said.

Dresner believes part of the appeal for tablets is that they have a “zero-training interface” and are increasingly becoming a type of device that relies on intuition rather than instruction.

In the months following his 2010 report, new products such as the Samsung Galaxy and the RIM PlayBook Tablet were introduced to the market, and his clients began urging him for more research. For his recent update, published just last month, Dresner returned to some of his original responding organizations to be resurveyed.

“I learned that things had, in fact, changed in six months,” he said, “as organizations were getting more and more experience under their belts.”

Some of the results published this year were pretty much expected. High interest in mobile BI remained consistent between the June and December surveys. Apple continues to dominate the market with the iPad and the iPhone as two of the top three platforms for mobile BI. And, some organizations -- such the health care industry and the government -- continue to question the security of mobile BI, especially in terms of downloading sensitive data. 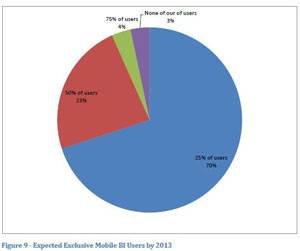 In a recent survey, 97% of respondents believe that 25% or more of users will be exclusively mobile by 2013. Image courtesy of Howard Dresner, copyright ©2011 by Dresner Advisory Services, LLC

But Dresner’s second survey included a few questions not included in the first. For Dresner, one of the most surprising finds was attached to this one: For what percentage of users will mobile BI replace traditional BI within the next two years?

“Turns out the answer is not zero,” he said. “Seventy percent said 25% of users would be exclusively mobile. … Only 3% said none.”

In certain industries this makes sense, Dresner said. For example, mobile BI for the retail industry means allowing staff to perform their jobs with immediate access to real data while never leaving the sales room floor.

The BlackBerry is still the No. 1 platform for mobile BI in terms of use, according to survey results. While its lead may be shrinking, survey respondents reported BlackBerry-based mobile BI as a high priority for their organizations. Dresner believes this is due to the BlackBerry’s well-established foothold in the market, indicating that organizations are continuing to support what they already have.

While the survey also revealed a growing interest in Apple, Android and RIM mobile BI platforms, Windows did not fare as well. He calls the relationship between Microsoft and Nokia a “Hail Mary.”

“I’m not convinced Microsoft can pull out of this one,” he said. “In my personal opinion -- it’s too little, too late, and they’ve neglected the space too long.”

Last July, just as tablets were making their way to the market, SearchBusinesssAnalytics.com checked in with end users and industry experts for their perspective on mobile BI. Although the press and blog posts were aflutter with the latest platforms, those on the ground floor weren’t as taken with them.

Today, the results are a bit more mixed, with end users clearly noticing a change in the market and, while acknowledging that BI functions on tablets could be useful, the interest may not have turned into actual purchases.

Howard Dresner is in the process of gathering respondents for his 2011 edition of “The Wisdom of Crowds BI Market Study,” a product of his own frustration with the market analysis he was seeing. The survey asks, in part, for qualified respondents to score vendors and vendor products in the BI world. Dresner will continue gathering surveys through April 8. If you’re interested in participating, visit www.howarddresner.com.

“I probably haven’t changed my opinion on mobile devices,” he said recently, adding that he recognizes the market is stronger today than it was eight months ago. DMA workers use PivotLink Web-based BI software for data analysis, and Szatkowski said he still can’t imagine transitioning to a smartphone for that.

However, tablets could be a different story.

“I use an iPad at home, and I love it,” he said. “There might be some application we could incorporate from an iPad standpoint.”

At this point, he said, NADA has more smartphones than tablets on hand, and that’s the kind of mobile BI platform they’ll continue to use.