If grocery stores operated like those old psych tests that measured how quickly a mouse could maneuver its way...

through a maze to find a piece of cheese, customers would likely become frustrated, eventually abandoning their carts for easier shopping solutions.

But organized and well-mapped-out grocery stores can produce the opposite effect. At least that’s the hope of one Finland-based grocery retailer, which decided to roll out SAS Integrated Merchandise Planning software to help create planograms. 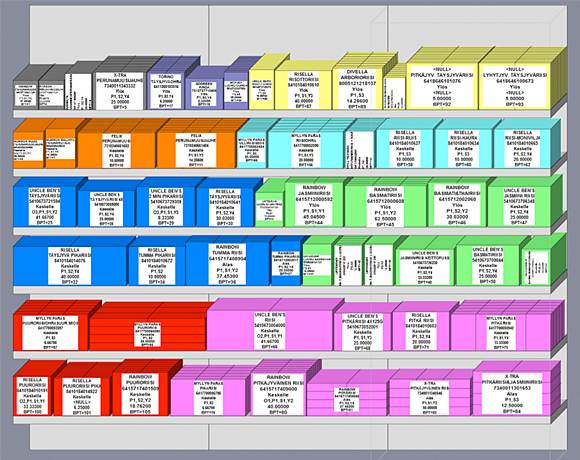 This image, just a small piece of an SOK planogram, provides a color-coded map of how 'rice and mashed potatoes powder' should be shelved. (Courtesy image)

Planograms help customers navigate their way in the store and find what they’re looking for on the shelves, according to Irja Simola, the chief information officer of the grocery retailer SOK, which is part of the S Group.

The particulars of planograms and planogram software

In the past, SOK manually created generic planograms—a common phrase in the retail world that details exactly where and how products should be shelved—and shipped them out to grocery outlets with similar needs and of similar size. The one-size-fits-all mentality worked, but not without some tweaking. After receiving the plans, store managers and owners would adjust the planograms to fit the actual shape of the store.

With close to 1,000 stores that range from smaller neighborhood outlets to the larger hypermarkets, SOK’s planogram production process was unable to best utilize the space for individual locations, Simola said. Now, by using SAS software, SOK can create unique planograms for each of its stores.

Although she said the results are difficult to quantify, Simola said moving to an electronic planogram production process has decreased SOK’s manual labor and, more important, has provided coherence.

“There are so many parameters,” Simola said. “It’s hard to say this or that is due to the new planogram system, but we can say that the planograms are much more consistent than they used to be, and they are an exact fit to the store. There’s no need for an adjustment.”

Having the ability to create unique planograms for stores is a significant function for SOK, but it isn’t the only function SAS software offers.

The SAS software also enables employees to track how customers are interacting with the overall space of a store by category, which can help shed light on what kinds of products are in high demand. This data combined with sales figures can impact how products are laid out within the store itself, Simola said. In other words, products in high demand may get better shelf position or a more prominent location than items selling more slowly.

“At the end of the day, this helps to decrease the cost of logistics and increase shelf availability, which increases customer satisfaction,” Simola said.

Simola said it’s “been quite a journey” getting things up and running. That journey goes beyond learning the new software or developing a new system of planogramming. One of the biggest challenges, she said, was integrating the software with the host system, most of which has been built in-house within the last decade.

Find out how a retail chain implemented SAP BusinessObjects.

Discover trends and tips on using business intelligence and analytics in the retail world.

According to Simola, the learning curve included training employees in the classroom and on-site on how to precisely input data, which includes cataloging details such as the dimensions of the products themselves.

“It’s not the software; it’s the optimizing engine. The software will do the work and create a planogram, but if the information is incorrect, the planogram will be useless,” she said. “I’ve been in the retail industry for a long time, and I never, ever saw anything that required this kind of accurate information. It is so critical.”

But, Simola said, as the employees learn the BI system and see the results. they’re finding that the growing pains are worth it in the end.

“Once we’ve completed the rollout, we will ask how we ever got along without this system,” she said.

“We wanted to produce store-specific planograms because our assortment planning system supports store-specific assortments,” Simola said, adding that stores have the ability to adjust assortment to their particular retail outlet to meet consumer demand and external competition. “We saw that the only way we could go forward to make this whole process more efficient was to find planogram assistance.”

Although it investigated other systems to help with space management, Simola said SAS came out ahead because of the software’s ability to produce a huge volume of unique planograms. According to Simola, SOK then worked with SAS to develop the software around the grocery retailer’s experience and its needs.

SOK, which has outlets in Estonia, Latvia, Lithuania and St. Petersburg, Russia, plans to roll out the SAS software in all its locations.

Clarification: This story was changed to describe more precisely how SOK utilizes the SAS software to analyze product demand against the location of individual products inside stores.