This content is part of the Essential Guide: DIY BI: A guide to self-service business intelligence implementation

E.B. Lane wanted to develop client strategies and communicate them to its customers, and that meant adopting a data culture. But the Phoenix-based online marketing and advertising firm didn't want to hire a full team of data scientists, so it looked to self-service analytics.

Shailesh Ghimire, director of digital strategy at E.B. Lane, said that adopting a self-service analytics tool alone was not sufficient for creating a data culture. Executive leadership understands the value of basing strategy on analytic results, and without this it would have been difficult for business users to embrace data-driven decision making, according to Ghimire. But the tool from Seattle-based Tableau Software that the company implemented about three years ago has helped the organization become more data-driven.

"Since we implemented the system, we now have a data culture," he said. "We are not hesitant to ask our customers to send their data because we have a tool that we know what to do with. The culture has really permeated our agency and given us confidence."

A serious supply-and-demand problem exists in data science. There is a growing demand for people who can handle and massage data, but not enough supply of skilled data scientists. One way companies like E.B. Lane are getting around this shortage is to implement self-service analytics tools that allow business users to manipulate data to spot opportunities, without requiring them to have a background in statistics or technology.

It helps move the data around out of the IT department to the people who are operationalizing that data.

Getting around the shortage

The shortage of skilled data workers has been talked about for years, but it doesn't seem to be abating. Boston-based BI and analytics software company Lavastorm Analytics recently surveyed 425 analytics professionals, C-suite executives, managers and business analysts from a variety of industries. The survey results, published in October, showed that while 83% said analytics was critical to their businesses' success, 65% said they were unable to hire enough workers with data skills.

"The vast majority of organizations really bought into analytics and were using it as the primary tool to make decisions, but the majority of people thought that they had a shortage of those skills," said John Joseph, vice president of product marketing at Lavastorm.

He said that a number of respondents said the skills gap has prevented their organization from becoming more data-driven in its decision making and has caused executives to question the importance of analytics findings. The problem is particularly pressing for marketing firms, which are now facing intense competition to become more data-driven, even though they have not traditionally employed many people with data skills.

One way they are getting around the problem is by implementing self-service analytics tools, which may require significant technical expertise to set up, but once running, can be used by business people who lack data or technical skills. Several emerging self-service analytics vendors -- including Lavastorm, Tableau, Qliktech and Logi Analytics -- are producing software that is intended to ingest data from a range of sources and graphically organize information without the user having to write code-based queries. 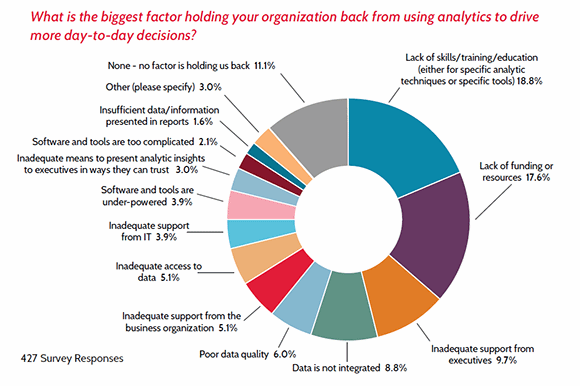 Andrew Lucyszyn, director of business intelligence and digital analytics at Rochester, N.Y.-based SIGMA Marketing Insights, also implemented Tableau Software within the last year. He said that self-service tools are all about getting data into the hands of the people who need it the most.

"It helps move the data around out of the IT department to the people who are operationalizing that data," he said. These people tend to be members of strategy teams or creative directors.

Older generations of analytics tools that required a data scientist to operate them could accomplish this feat too, but it would take much longer for the business user to get the information they need, Lucyszyn said. Today, rather than putting in a request with a help desk and waiting for an analyst to address the request, business users can do their own analyses, which Lucyszyn said reduces the time to insight. Marketing professionals can do things like analyze channel spend, market segmentation and other trends on their own time.

Check out this definition of self-service business intelligence

Still, self-service tools can't do everything that more robust analytics systems can, and depending on the level of analysis a marketing firm wants to conduct, total reliance on self-service may not be feasible. For this reason, data scientists aren't going to be replaced any time soon.

Joseph said he still sees a role for data scientists at many organizations. At the very least, they are important for setting data governance policies and defining the division of labor between IT and business divisions. But for organizations that can't find a qualified data professional or have little need for deep analyses, self-service software can fill in some holes and help organizations get started competing on data.

LalitBhamare - 31 May 2015 3:11 PM
In order to succeed, organizations definately need to provide self-service BI analysis tools that fit all business and users